(January 28, 1912 – August 11, 1956), known as Jackson Pollock, was an influential American painter and a major figure in the abstract expressionist movement. He was well known for his unique style of drip painting.

During his lifetime, Pollock enjoyed considerable fame and notoriety, a major artist of his generation. Regarded as reclusive, he had a volatile personality, and struggled with alcoholism for most of his life. In 1945, he married the artist Lee Krasner, who became an important influence on his career and on his legacy.

Pollock was born in Cody, Wyoming, in 1912, the youngest of five sons. His parents, Stella May (née McClure) and LeRoy Pollock, were born and grew up in Tingley, Iowa and were educated at Tingley High School. Pollock’s mother is interred at Tingley Cemetery,Ringgold County, Iowa. His father had been born with the surname McCoy but took the surname of his adoptive parents, neighbors who adopted him after his own parents had died within a year of each other. Stella and LeRoy Pollock were Presbyterian; they were of Irish and Scots-Irish descent, respectively.[5] LeRoy Pollock was a farmer and later a land surveyor for the government, moving for different jobs. Jackson grew up in Arizona and Chico, California.

While living in Echo Park, California, he enrolled at Los Angeles’ Manual Arts High School, from which he was expelled. He already had been expelled in 1928 from another high school. During his early life, Pollock explored Native American culture while on surveying trips with his father.

In 1930, following his older brother Charles Pollock, he moved to New York City, where they both studied under Thomas Hart Benton at the Art Students League. Benton’s rural American subject matter had little influence on Pollock’s work, but his rhythmic use of paint and his fierce independence were more lasting. In the early 1930s Pollock spent a summer touring the Western United States together with Glen Rounds, a fellow art student, and Benton, their teacher.

From 1938 to 1942, during the Great Depression, Pollock worked for the WPA Federal Art Project.

Trying to deal with his established alcoholism, from 1938 through 1941 Pollock underwent Jungian psychotherapy with Dr. Joseph Henderson and later with Dr. Violet Staub de Laszlo in 1941-1942. Henderson engaged him through his art, encouraging Pollock to make drawings. Jungian concepts and archetypes were expressed in his paintings. Recently historians have hypothesized that Pollock might have had bipolar disorder.

Pollock signed a gallery contract with Peggy Guggenheim in July 1943. He received the commission to create Mural (1943), which measures roughly 8 feet tall by 20 feet long, for the entry to her new townhouse. At the suggestion of her friend and advisor Marcel Duchamp, Pollock painted the work on canvas, rather than the wall, so that it would be portable. After seeing the big mural, the art critic Clement Greenberg wrote: “I took one look at it and I thought, ‘Now that’s great art,’ and I knew Jackson was the greatest painter this country had produced.”

In October 1945, Pollock married the American painter Lee Krasner. In November they moved out of the city to the Springs area of East Hampton on the south shore of Long Island. With the help of a down-payment loaned by Peggy Guggenheim, they bought a wood-frame house and barn at 830 Springs Fireplace Road. Pollock converted the barn into a studio. In that space, he perfected his big “drip” technique of working with paint, with which he would become permanently identified.

Pollock was introduced to the use of liquid paint in 1936 at an experimental workshop in New York City by the Mexican muralist David Alfaro Siqueiros. He later used paint pouring as one of several techniques on canvases of the early 1940s, such as Male and Female and Composition with Pouring I. After his move to Springs, he began painting with his canvases laid out on the studio floor, and he developed what was later called his “drip” technique.

He started using synthetic resin-based paints called alkyd enamels, which, at that time, was a novel medium. Pollock described this use of household paints, instead of artist’s paints, as “a natural growth out of a need”. He used hardened brushes, sticks, and even basting syringes as paint applicators. Pollock’s technique of pouring and dripping paint is thought to be one of the origins of the term action painting. With this technique, Pollock was able to achieve a more immediate means of creating art, the paint now literally flowing from his chosen tool onto the canvas. By defying the convention of painting on an upright surface, he added a new dimension by being able to view and apply paint to his canvases from all directions.

A possible influence on Pollock was the work of the Ukrainian American artist Janet Sobel (1894–1968) (born Jennie Lechovsky). Peggy Guggenheim included Sobel’s work in her The Art of This Century Gallery in 1945. With Jackson Pollock, the critic Clement Greenberg saw Sobel’s work there in 1946. In his essay “American-Type Painting,” Greenberg noted those works were the first of all-over painting he had seen, and said that “Pollock admitted that these pictures had made an impression on him”.

While painting this way, Pollock moved away from figurative representation, and challenged the Western tradition of using easel and brush. He used the force of his whole body to paint, which was expressed on the large canvases. In 1956, Time magazine dubbed Pollock “Jack the Dripper,” due to his painting style.

My painting does not come from the easel. I prefer to tack the unstretched canvas to the hard wall or the floor. I need the resistance of a hard surface. On the floor I am more at ease. I feel nearer, more part of the painting, since this way I can walk around it, work from the four sides and literally be in the painting.

I continue to get further away from the usual painter’s tools such as easel, palette, brushes, etc. I prefer sticks, trowels, knives and dripping fluid paint or a heavy impasto with sand, broken glass or other foreign matter added.

When I am in my painting, I’m not aware of what I’m doing. It is only after a sort of ‘get acquainted’ period that I see what I have been about. I have no fear of making changes, destroying the image, etc., because the painting has a life of its own. I try to let it come through. It is only when I lose contact with the painting that the result is a mess. Otherwise there is pure harmony, an easy give and take, and the painting comes out well.

Pollock observed American Indian sandpainting demonstrations in the 1940s. Referring to his style of painting on the floor, Pollock stated, “I feel nearer, more a part of the painting, since this way I can walk round it, work from the four sides and literally be in the painting. This is akin to the methods of the Indian sand painters of the West.” Other influences on his drip technique include the Mexican muralists and Surrealist automatism. Pollock denied reliance on “the accident”; he usually had an idea of how he wanted a particular piece to appear. His technique combined the movement of his body, over which he had control, the viscous flow of paint, the force of gravity, and the absorption of paint into the canvas. It was a mixture of controllable and uncontrollable factors. Flinging, dripping, pouring, and spattering, he would move energetically around the canvas, almost as if in a dance, and would not stop until he saw what he wanted to see. As another important influence can be cited Wolfgang Paalen´s article on Totem Art of the indigenous people of British Columbia and his Fumage paintings which he had seen at Julien Levy´s exhibition of Paalen´s surrealist paintings in 1940. Pollock owned a signed and dedicated copy of the Amerindian Number of Paalen´s magazine (DYN 4-5, 1943) in which the revolutionary space concept in totemist art from the North-West-Coast is broadly discussed from an artist´s point of view. Another strong impact must have been Paalen´s fumage technique, as it was the surrealist technique with the most magic appeal for those painters who looked for new ways of making appear what was called the unseen or the possible. Fumage was presented also in Matta´s workshop about which Steven Naifeh reports: »Once, when Matta was demonstrating the Surrealist technique [Paalen´s] Fumage, Jackson [Pollock] turned to Busa and said in a stage whisper: ›I can do that without the smoke. Pollock´s painter friend Fritz Bultman even stated (hinting at the revolutionary possibility-space of Paalen): “It was Wolfgang Paalen, who started it all.” 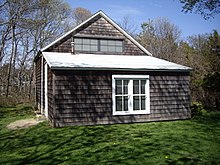 In 1950, Hans Namuth, a young photographer, wanted to take pictures (both stills and moving) of Pollock at work. Pollock promised to start a new painting especially for the photographic session, but when Namuth arrived, Pollock apologized and told him the painting was finished.

Namuth’s said that when he entered the studio:

A dripping wet canvas covered the entire floor … There was complete silence … Pollock looked at the painting. Then, unexpectedly, he picked up can and paint brush and started to move around the canvas. It was as if he suddenly realized the painting was not finished. His movements, slow at first, gradually became faster and more dance like as he flung black, white, and rust colored paint onto the canvas. He completely forgot that Lee and I were there; he did not seem to hear the click of the camera shutter … My photography session lasted as long as he kept painting, perhaps half an hour. In all that time, Pollock did not stop. How could one keep up this level of activity? Finally, he said ‘This is it.’

Pollock’s finest paintings… reveal that his all-over line does not give rise to positive or negative areas: we are not made to feel that one part of the canvas demands to be read as figure, whether abstract or representational, against another part of the canvas read as ground. There is not inside or outside to Pollock’s line or the space through which it moves…. Pollock has managed to free line not only from its function of representing objects in the world, but also from its task of describing or bounding shapes or figures, whether abstract or representational, on the surface of the canvas.

In the 21st century, the physicists Richard Taylor, Adam Micolich and David Jonas studied Pollock’s works and technique. They determined that some works display the properties of mathematical fractals although this could not be replicated by others. They assert that the works expressed more fractal qualities as Pollock progressed in his career. The authors speculate that Pollock may have had an intuition of the nature of chaotic motion, and tried to express mathematical chaos, more than ten years before “Chaos Theory” was proposed. Their work was used in trying to evaluate the authenticity of some works that were represented as Pollock’s.

Other contemporary experts have suggested that Pollock may have imitated popular theories of the time in order to give his paintings a depth not previously seen.

In 1955, Pollock painted Scent and Search, his last two paintings. He did not paint at all in 1956, but was making sculptures at Tony Smith’s home: constructions of wire, gauze, and plaster. Shaped by sand-casting, they have heavily textured surfaces similar to what Pollock often created in his paintings.

On August 11, 1956, at 10:15 pm, Pollock died in a single-car crash in his Oldsmobile convertible while driving under the influence of alcohol. One of the passengers, Edith Metzger, was also killed in the accident, which occurred less than a mile from Pollock’s home. The other passenger, Ruth Kligman, an artist and Pollock’s mistress, survived.

For the rest of her life, his widow Lee Krasner managed his estate and ensured that Pollock’s reputation remained strong despite changing art world trends. The couple are buried in Green River Cemetery in Springs with a large boulder marking his grave and a smaller one marking hers.